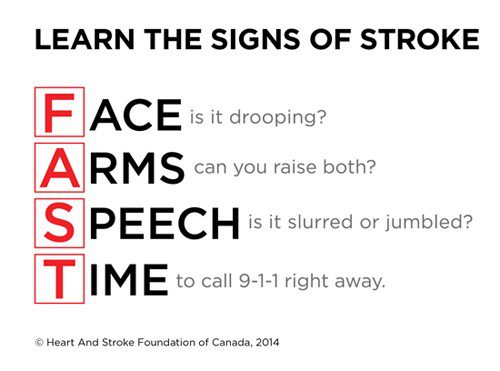 Stroke is a loss of brain function caused by an interruption in blood flow. If blood flow is not restored, the loss of function can be permanent as brain cells die. Stroke is the 3rd leading cause of death in Canada, causing 6% of all deaths in Canada. Stroke affects more women than men. It is estimated that there are 50,000 strokes in Canada each year. There are 2 types of stroke: ischemic and hemorrhagic. 80% of all strokes are ischemic, caused by a blood clot stopping blood flow to part of the brain. Ischemic strokes are an uncontrolled bleed in the brain.

Transient Ischemic Attacks (TIAs) or mini-strokes result from a partial and temporary blockage in blood flow. Symptoms usually resolve within minutes to hours. People who experience TIAs are 5 times more likely to have a stroke over the next 2 years compared to the general population.

People who have suffered a stroke may experience effects long after the stroke itself: weakness or paralysis on one side of the body, difficulty doing tasks that used to be easily accomplished, memory problems, difficulty speaking, problems with vision. Often these changes in ability can be improved with rehabilitation. The kind of challenges a person experiences depends on where in the brain the stroke occurred.

If you believe someone is having a stroke, call 911 immediately and be sure to inform the operator that the person may be having a stroke. Immediate attention is vitally important, as once a stroke begins brain cells begin to die. Faster care translates into a better prognosis and improved recovery. At hospital, care should be immediate, beginning with a brain scan to determine what kind of stroke is occurring. Once the care team know what kind of stroke they are dealing with, treatment can begin.

Of course, preventing a stroke is much better than having to treat one. You can’t change your age, gender or family history, but controlling the risk factors that you can will reduce your chances of having a stroke. If you smoke, quit. Eat healthy foods and exercise regularly. Take your medication as prescribed.  Recognize TIAs as a warning of stroke and consider them a medical emergency.

Your physician, pharmacist and other health care professionals all have a role to play in helping you understand and treat your risk factors for stroke.